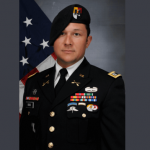 The Pentagon says a Lexington soldier was one of three killed by a bomb blast Tuesday in Afghanistan. He is identified as 29-year-old Army Captain Andrew Ross. The Defense department says the three died after their vehicle was hit by an improvised explosive device. Ross was assigned to an airborne special forces group at Fort Bragg.