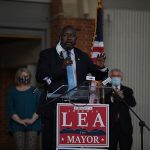 There will be some new faces on Roanoke City Council but one returning member and the Mayor remain the same. More on an election that was a cliffhanger until late last night from WFIR’s Gene Marrano: