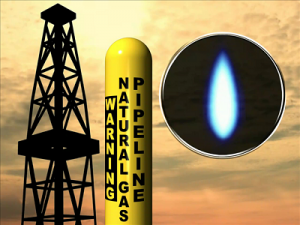 RICHMOND, Va. (AP) — When plans for the 605-mile Atlantic Coast Pipeline were first unveiled in 2014, supporters of the natural gas project brimmed with enthusiasm and promises.

The pipeline would bring natural gas from West Virginia to growing markets in Virginia and North Carolina, and with it, would come economic development, thousands of jobs and reduced energy costs for consumers, supporters said.

A beaming Virginia Gov. Terry McAuliffe called it a “win-win,“saying it would be good for the environment,too, because it would help speed up the closing of aging coal plants.

Since then, the project has faced one setback after another, with legal challenges brought by environmental groups — prompting the dismissal or suspension of eight permits and halting construction for more than a year.

Now,three years behind schedule, with a price tag that has nearly doubled to $8 billion, the project is headed to the U.S. Supreme Court for a hearing Monday on a critical permit.

Backed by the Trump administration, the project developers — Dominion Energy and Duke Energy — will ask the high court to reverse a federal appeals court ruling that threw out a permit needed for the pipeline to cross two national forests, including parts of the Appalachian Trail, the historic footpath that stretches from Georgia to Maine.

In its ruling, a three-judge panel of the Richmond-based 4th U.S. Circuit Court of Appeals sharply criticized the U.S. Forest Service for granting a special-use permit to build the pipeline through parts of the George Washington and Monongahela National Forests, and to cross the Appalachian Trail.

The court found that the Forest Service did not have the statutory authority to approve the trail crossing and said the agency had “abdicated its responsibility to preserve national forest resources.”

The question before the Supreme Court is whether the Forest Service has authority to grant rights-of-way for gas pipelines through lands crossed by the Appalachian Trail within national forests.

The project developers, joined by U.S. Solicitor General Noel Francisco, say the answer is yes, arguing the Forest Service is the agency that holds jurisdiction over land in the George Washington National Forest. But the environmental groups say the answer is no because the 2,200-mile (3,540-kilometer) scenic trail is considered a unit of the National Park System and only Congress can approve such a crossing.

Under plans for the project, a 0.1-mile segment of the pipeline would cross about 700 feet (213 meters) beneath the Appalachian Trail.

That tiny segment is a key component of the pipeline project’s route.

“It’s important because Dominion has really bet its project on this crossing point,” said Greg Buppert, a senior attorney with the Southern Environmental Law Center, which sued on behalf of the Sierra Club and other environmental groups.

Dominion spokeswoman Ann Nallo said the company chose that crossing point after consulting with federal agencies to determine the best route for the pipeline.

“Part of the determination involved the impact on the environment,” Nallo said.

In its ruling, the 4th Circuit found that the Forest Service had “serious environmental concerns” about the project that were “suddenly, and mysteriously, assuaged in time to meet a private pipeline company’s deadlines.”

The stakes are high for lead developer, Dominion, a dominant corporate power in Virginia politics and favorite landing spot for government officials. U.S. Attorney General Bill Barr spent a decade on the company’s board before joining the Trump administration.

The company is counting on the project to help balance its books after aggressive purchases of other energy companies in recent years.

“Make no mistake, if that pipe is canceled, it certainly is balance sheet destructive, and it will impact Dominion’s growth rate,” said Shar Pourreza, an analyst who follows Dominion as Guggenheim Partners’ managing director for North American power and utilities.

Dominion has some heavy-hitters on its side, with support from 18 state attorneys general, more than 60 members of Congress, trade associations and labor unions.

A host of environmentalists, land owners and communities along the pipeline route have urged the Supreme Court to uphold the 4th Circuit’s ruling.

Dominion says the pipeline will bring a critical new gas supply to Virginia and North Carolina to support the shift away from coal and toward intermittent natural resources like solar. The company also says greater availability of natural gas will attract manufacturing businesses.

Critics question the assertion that the gas is needed.

In a brief filed with the Supreme Court, Virginia Attorney General Mark Herring’s office said recent analyses indicate the demand for natural gas will remain flat or decrease for the foreseeable future.

In an earnings call with investment analysts earlier this month, Dominion CEO Tom Farrell said the company is “optimistic” that the Supreme Court will issue an order reversing the 4th Circuit ruling in May or June. He said Dominion is working with the U.S. Fish and Wildlife Service on a separate permit related to endangered species and then anticipates resuming construction “across major portions of the pipeline.”

But opponents of the project emphasize that six other permits have been revoked or suspended, including a permit to build a gas compressor station in the historic African American community of Union Hill in Virginia.

“The bottom line is, no matter what happens on Monday, there are others issues,” said Lew Freeman, executive director of the Allegheny-Blue Ridge Alliance, a nonprofit coalition of 51 organizations opposing the pipeline.