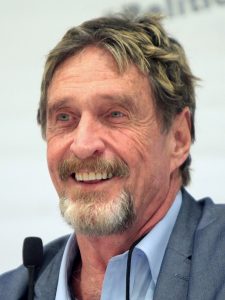 John McAfee, the security software pioneer and Roanoke College alum who tried to embrace life as an outsider while running from legal troubles, including possible murder, was found dead in a Spanish jail cell on Wednesday. His death came just hours after a Spanish court announced that it had approved his extradition to the United States to face tax charges punishable by decades in prison, authorities said. McAfee, who was among other things a cryptocurrency promoter, tax opponent, U.S. presidential candidate and fugitive who publicly embraced drugs, guns and sex, had a history of legal troubles spanning from Tennessee to Central America to the Caribbean.