State police say a series of crashes on Interstate 81 a few miles southwest of Wytheville killed two people and seriously injured another person. It started when tractor-trailer overturned sometime before 3:30 a.m, coming to rest across the median and one travel lane. The truck driver was able to escape without injury before a passenger vehicle hit the truck. The driver of the passenger vehicle died on the way to the hospital. Police say moments after the first incident, a tractor-trailer traveling north on I-81 struck a guardrail left on the roadway from the original accident and ran off the left side of the interstate. It struck a bridge and crashed below onto Rt. 90 (Black Lick Road). The tractor-trailer caught fire upon impact. The driver of that rig died at the scene. A passenger was ejected from the sleeper cab and flown to a nearby hospital for treatment of serious injuries.

(Continue reading for State Police photos at the scene.) 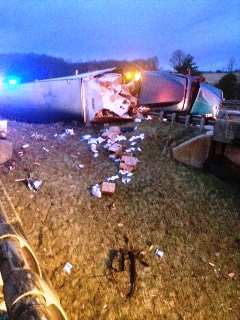 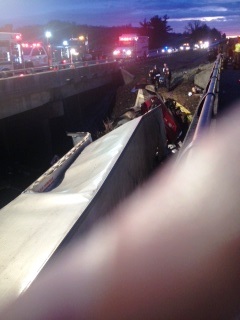