Insect harmful to vineyards spreads across the mid-Atlantic 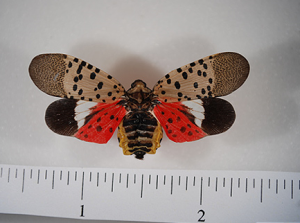 There is an insect that is native to China spreading across the mid-Atlantic region, one that is harmful to fruit crops — only this time, it is not the stink bug. The spotted lanternfly was first seen in the US about seven years ago in Pennsylvania. At Virginia Tech’s Agricultural Research and Extension Center, Director Kevin Rice says it is spreading quickly, in large part because females will lay eggs on just about any flat surface, including movable ones like cars and train cargo.

Researchers are looking at how to most effectively contain the Spotted Lanternfly population, in part by learning which insecticides work best. But they’re also investigating how two fungus species native to North America that attack insects might make for the most effective and environmentally sustainable long-term solution if they can be applied in sort sort of spray form.  WFIR’s Evan Jones has more: