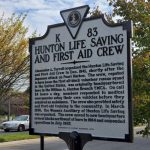 Roanoke was by many accounts the home of one of the first rescue squads in the country. In addition the Hunton Life Saving and First Aid Crew – organized in late December 1941 – is also recognized as the first African-American squad in America. As of this morning there’s a new historical marker on Wells Avenue near Henry Street honoring the Hunton Crew.  Former Roanoke Mayor and local history author Nelson Harris helped research the crew’s history. Roanoke Fire-EMS chief David Hoback worked with the Hunton crew early in his career, before it disbanded in 1987.