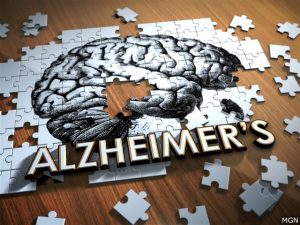 Federal regulators recently approved a drug for treatment of Alzheimer’s and its debilitating effects on the brain, but experts say in many cases, middle-aged men and women can take steps to reduce the chances of dealing with it later in life. Dr. James Carney is UnitedHealthcare’s Chief Medical Officer for Medicare and Retirement in several states that include Virginia. He says choosing a healthy lifestyle now – diet, exercise, moderation in alcohol and no smoking at all – are known to lower the risk of Alzheimer’s later on. More than 6 million Americans currently have Alzheimer’s; in Virginia, the number is about 150,000, and Carney says that number is expected to grow another 40,000 by 2025. WFIR’s Evan Jones has more: