How low can you go? Unemployment rate dips again 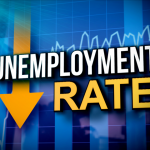 RICHMOND, VA – Governor Glenn Youngkin today announced that Virginia’s unemployment rate fell to 3.2% in February while total nonfarm payroll employment increased by 21,300 jobs. The Commonwealth’s seasonally adjusted unemployment rate of 3.2% is 1.4 percentage points below the rate from a year ago. The labor force increased by 14,138 to 4,291,990, as the number of unemployed residents decreased by 3,330 to 136,004. The number of employed residents rose by 17,468 to 4,155,986. Virginia’s seasonally adjusted unemployment rate continues to be below the national rate, which fell from 4.0 to 3.8 percent.
The Commonwealth’s labor force participation rate increased slightly by 0.1 of a percentage point to 63.0 percent in February. The labor force participation rate measures the proportion of the civilian population age 16 and older that is employed or actively looking for work. “Given our current economy and business environment, now is a great time to forge a career and join the workforce in the Commonwealth.” said Governor Youngkin. “Although we see an uptick in the labor force participation, my administration is laser focused on continually increasing our labor participation rate.”
“With a 3.2% unemployment rate in February, Virginia continues to outperform most states,” said Secretary of Commerce and Trade Caren Merrick. “The number of employed residents grew while our labor force rose significantly last month.”
“The latest jobs figures indicate that Virginia is trending in the right direction,” said Secretary of Labor Bryan Slater. “The increase in February payroll jobs is encouraging, as year-over-year job growth was spread across most industries.”