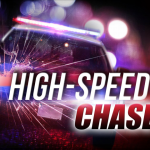 (from Va State Police) At approximately 12:45 p.m.[ on Friday] the Town of Bedford initiated a pursuit of a stolen vehicle.  The vehicle was a 2003 Saturn Vue, which was stolen from a residence in Bath County.  The suspect, James Michael Rakes, 50, of Dublin, Va. was known to the victim and police were able to locate the vehicle and the suspect by his cell phone.  When police approached the vehicle, the driver fled.  The town of Bedford discontinued the pursuit and the Virginia State Police took over.  Troopers pursued the vehicle into Botetourt County, where spike strips were used on Route 220 to disable the stolen car.  The vehicle stopped at the Sheetz on Route 220 and Route 779.  Rakes fled into the store and was located in the bathroom at the Sheetz.
Rakes was taken into custody with further incident and was transported to the Botetourt County Jail. Rakes was wanted in Bath County for the stolen vehicle and will face additional charges relating to the pursuit. No law enforcement officers or the public were injured in the pursuit.