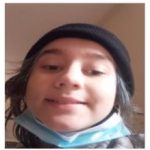 Latest update 10pm: On February 12, 2021, at 1:45 pm, Allie Michelle Broadaway was reported missing from her home on Reed Creek Dr.  Through the investigation, it was discovered that Kaleb Christopher Merritt met Broadaway in December 2020 on Instagram.  They communicated via social media until Merritt traveled to Virginia in early February 2021 to meet with Broadaway.

During the course of the investigation, information was received that led investigators to believe Merritt was located in Henderson, North Carolina.  Investigators from Henry County, along with Agents from the FBI coordinated with authorities from North Carolina.  The Henderson, NC Police Department located Merritt and he was taken into custody.  Allie Broadaway was found with Merritt.  Broadaway was found safe and checked by EMS for minor injuries.

This incident remains under investigation by the Henry County Sheriff’s Office, FBI and Virginia State Police.

Earlier Update: Henry County Sheriff Lane Perry will be conducting a press conference today, Saturday, February 13  at 3:00 pm.  Sheriff Perry will be releasing information in regards to the abduction of Allie Michelle Broadaway.

The child is believed to have been abducted by Kaleb Christopher Merritt, White Male, Brown hair, Green eyes, 5 foot 10 inches tall, weighing 250 lbs,  There is no clothing description for the suspect at this time. Possibly driving a 2000 Light Green Mercury Grand Marquis, TX tag DMP-2294. For further information contact the Henry County Sheriff’s Office at 276-638-8751 or visit Twitter.com/VSPalerts