Holton was honored with plaza in downtown Roanoke 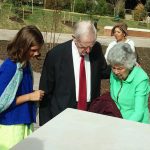 A former Republican Governor who was also the father-in-law of Democratic US Senator Tim Kaine has passed away. Linwood Holton Jr. was Governor in the early 1970’s, when he also signaled support for desegregation by placing his children – including Tim Kaine’s future wife Anne Holton – in mostly back Richmond Public Schools. Holton practiced law in Roanoke before entering politics and four years ago “Linwood Holton Plaza” was dedicated downtown across from Elmwood Park, featuring quotes from the former Governor.

Despite their different party affiliations, Tim Kaine said in a statement that Linwood Holton was his “public service role model.”