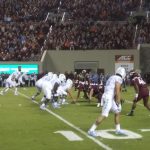 BLACKSBURG – Quincy Patterson’s two-point conversion run in the sixth overtime lifted Virginia Tech a wild 43-41 victory over North Carolina on Saturday at Lane Stadium in the longest game in ACC history. With the victory, the Hokies moved to 5-2 overall, 2-2 in the ACC, and they beat North Carolina for the fourth consecutive time. The Tar Heels fell to 3-4 overall, 2-2 in league play.

The game marked the nationwide debut of college football’s new overtime rules, which now call for going for two points after the fourth overtime. Both teams misfired on opportunities to win the game in earlier overtime periods, as Tech kicker Brian Johnson missed game-winning attempts from 41 and 42 yards and North Carolina kicker Noah Ruggles missed from 35 yards and had a 44-yard attempt blocked.

In the fifth overtime, the Hokies had the ball first, but Patterson’s pass to Damon Hazelton was broken up by the Tar Heels’ Storm Duck, giving the Tar Heels an opportunity to win the game.
North Carolina, though, couldn’t convert. Tech’s Khalil Ladler read a pitch play perfectly and tackled Michael Carter for a loss, sending the game into a sixth overtime. The Tar Heels received the ball first, but Ladler and others sacked quarterback Sam Howell, setting up Patterson’s game-winning conversion. (from Hokiesports.com)