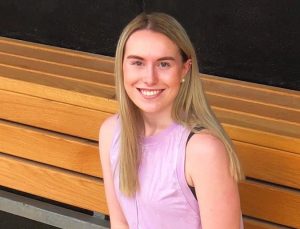 NEWS RELEASE: On National Girls and Women in Sports Day, the Lynchburg Hillcats are pleased to announce the hiring of Maura Sheridan as the first female broadcaster in team history. Sheridan, 23, will serve as the Hillcats’ play-by-play voice for all 140 games and as the media liaison for the club.

“I’m excited to welcome Maura to the awesome team here in Lynchburg,” said Hillcats’ President and General Manager Chris Jones. “Her wealth of broadcasting experience and familiarity with the Carolina League made her the perfect fit for this position.”

Sheridan makes her way to Lynchburg having already spent a year in the Carolina League, acting as the assistant broadcaster with the Fayetteville Woodpeckers (A-Adv., Houston Astros) in their inaugural season. With the Woodpeckers, she called all 70 home games, including Fayetteville’s run to the Mills Cup Championship.

Born and raised in the Northeast, Sheridan keeps warm in the winter as the voice of University of Vermont women’s basketball. With the Catamounts she handles all aspects of the live basketball broadcast, while also calling a myriad of other sports for UVM and in the New England area.

A 2018 graduate of Syracuse University, Sheridan got her first taste of working in baseball in the summer of 2017 while interning in the prestigious Cape Cod League, calling games and reporting field side for the Brewster Whitecaps.

After two stellar years in Lynchburg, former Hillcats’ broadcaster Max Gun is set to pursue other broadcasting opportunities in Seattle.