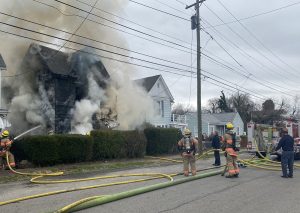 Roanoke City fire officials say a northwest home is a total loss and a pet is unaccounted for after a morning fire on the 700 block of Loudon Avenue. There is no word yet on the cause of the fire, one that also damaged a neighboring home.

From Roanoke Fire-EMS: At 10:44am, Roanoke Fire-EMS was dispatched to the 700 block of Loudon Ave NW for a fire. Units arrived to find heavy smoke and flames coming from a residential structure. The homes located on either side of the residence on fire were evacuated for risk of possible exposure. One pet remains unaccounted for, no other injuries were reported. Two homes were affected by the blaze, the home where the fire originated is a total loss and the neighboring home sustained minor damage that will leave the residents temporarily displaced. Residents are being assisted by the American Red Cross.