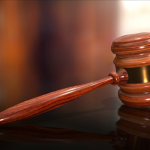 A Danville man was sentenced today in federal court to 54 years and seven months in prison for a series of armed robberies. 34-year-old Justin Stallings was convicted in March for the holdups, which included the Dollar General stores in Bedford and Rocky Mount. The feds say the case is part of federal efforts to prosecute serious firearms offenses.

“This case illustrates our commitment to prosecuting violent offenders and serious firearms offenses in federal court,” U.S. Attorney Cullen stated today.  “I am grateful for the hard work and continuing support of our many state and local partners in helping us to identify violent offenders in specific communities and hold them accountable under federal law.”

“The FBI is fully committed to identifying violent offenders who prey on our communities and removing them from our streets,” Special Agent in Charge Archey said today. “Mr. Stallings robbed multiple businesses and victimized employees during his crime spree, and the sentence handed down today is just.  This investigation was conducted by the FBI Richmond Safe Streets Gang Task Force, who along with our state and local partners, will continue to utilize our manpower and resources to protect the communities we serve.”

A jury found that Stallings committed seven armed robberies between December 2016 and February 2017.  At each location, Stallings entered a store near closing time and pointed his firearm at employees.  Through fear and intimidation of the employees, he then proceeded to steal cash from the register and goods from the store.  All told, Stallings used a firearm to commit robberies at each of the following businesses in Virginia and North Carolina:

PSN is the centerpiece of the Department of Justice’s violent crime reduction efforts.  PSN is an evidence-based program proven to be effective at reducing violent crime. Through PSN, a broad spectrum of stakeholders work together to identify the most pressing violent crime problems in the community and develop comprehensive solutions to address them. As part of this strategy, PSN focuses enforcement efforts on the most violent offenders and partners with locally based prevention and reentry programs for lasting reductions in crime.