Has the bald eagle population along the James River peaked? 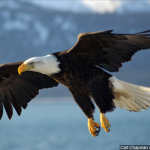 NORFOLK, Va. (AP) – The bald eagle population along Virginia’s James River made a stunning comeback after falling to zero in the 1970s.
Scientists now wonder if the James has reached “peak eagle.”
William & Mary said in a press release Wednesday that the population has plateaued. Two university biologists are now looking out for signs of natural population decline.
Bald eagles live up to 30 years. They’re extremely territorial and generally mate for life. So, more and more eagles are competing for limited space.
Biologists survey the river by airplane each spring. In late April, they’ll count hatched chicks along the river.
The birds’ recovery can be traced to the federal government’s ban of the pesticide DDT in 1972. Eagles were also given endangered status under the Endangered Species Act in 1967.