Goodwill Industries of the Valleys hires new President and CEO 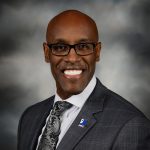 (Goodwill release) Goodwill Industries of the Valleys is pleased to share Richmond J. Vincent Jr. has been named president and CEO, effective March 22, 2021. In partnership with Voltage Leadership, Goodwill’s Board of Directors began the search process when current CEO Bruce Phipps announced his retirement after nearly 18 years leading the organization.

Richmond is currently president and CEO of Goodwill Industries of South Mississippi (Gulfport) and Mississippi Goodworks. Named to this position in 2017, he is responsible for 12 retail stores, two training centers and six SourceAmerica contracts.
In addition to leading Goodwill Industries of South Mississippi, he is a member of the Mississippi Gulf Coast Business Council Executive Committee, member of the Goodwill Industries International Board of Directors and Conference of Executives Executive Council. Richmond was also recognized as a Best CEO in Mississippi by Mississippi Business Journal.
Prior to joining Goodwill in Gulfport, Richmond served as the Senior Vice President of Workforce Development for the Goodwill of Central and Northern Arizona (Phoenix). In this role, more than 99,000 Arizonans received job preparation services in 2016, with more than 48,000 acquiring gainful employment. He created the agency’s first career center co-located with a community-based organization. He also spearheaded the development and implementation of the initial fundraising program.
We are excited to welcome Richmond to our organization. His passion for Goodwill’s mission will enable us to continue to provide programs and services with a long-lasting impact on the economic health of individuals and our community now, and well into the future.
“I am thrilled about my new role at Goodwill Industries of the Valleys and serving the communities in Central, Southwest, and Southside Virginia,” said Richmond Vincent Jr. “I am eager to build on the success of a strong organization and honored to lead future successes which will be possible with the MacKenzie Scott gift, loyal donors and shoppers, collaborating with community and business partners, and dedicated Goodwill employees.”