Floyd’s cousin implores marchers to be a force for change 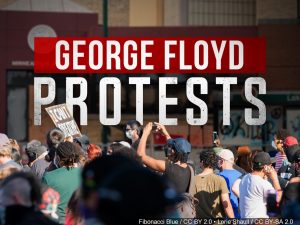 RICHMOND, Va. (AP) — Thousands of people gathered in Richmond on Saturday for Virginia’s “5000 Man March,” a demonstration against racism that included a speech by the cousin of George Floyd, the black man whose death at the hands of police has prompted weeks of protests around the world.

The demonstrators gathered at the city’s famed monument of Confederate Gen. Robert E. Lee before making a loop around the downtown. They returned to the monument about two hours later to hear speakers, including a relative of Floyd, the man who died last month after a Minneapolis police officer kneeled on his neck for several minutes as he pleaded for air.

Tavares Floyd, George Floyd’s cousin, stepped onto the Lee monument and was welcomed by applause from the surrounding crowd of demonstrators in the former capital of the Confederacy.

WRIC-TV reports that Floyd spoke about many different racial inequalities that the black community faces in Virginia and throughout the nation.

Floyd asked everyone to take a deep look at themselves, and implored them to be the change they want to see.

“I can’t breathe,” Floyd said, reciting some of his cousin’s final words.

“My cousin perished and he died pleading for his mother, and he died at the hands of police officers. That’s what it means to be a black man in this country.”