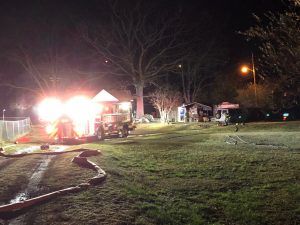 NEWS RELEASE: The Salem Fire & EMS Department responded to a structure fire at 248 Butt Hollow Rd. Saturday night at approximately 8:42 p.m. One firefighter did sustain an injury and he was transported to LewisGale Medical Center by ambulance. The firefighter was treated and later released from the hospital.

The first units arrived within eight minutes of receiving the call and found heavy smoke coming from the front of the building. No one was home at the time of the fire, but it took firefighters more than an hour to bring the fire under control and the home did sustain significant damage.

The fire remains under investigation by the Salem Fire Marshal’s Office and there is no damage estimate, presently.