Fire at Sunscape Apartments in SW Roanoke County this morning 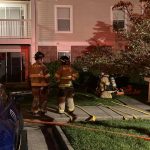 (Roanoke County, VA—August 30, 2020)At 12:37 a.m. on August 30 units from Stations 3 (Cave Spring), 7 (Clearbrook) and 11 (Back Creek) responded for the report of a commercial structure fire in the 3500 block of Sunchase Lane in the Sunscape Apartments. First arriving crews did find smoke and flames and marked it a working fire. One person was injured while attempting to gain access to a fire extinguisher. That patient was treated on scene and refused transport to a local hospital. The fire was marked under control in approximately 22 minutes. The fire appears to have started on an outdoor balcony. Most of the fire damage was contained to the exterior of the structure. No one was displaced because of this fire. The Roanoke County Fire Marshal’s Office has now determined that this fire was accidental but the cause remains undetermined. The estimated damages are $50,000.