Fawns meet traffic — and never learn how to deal with it 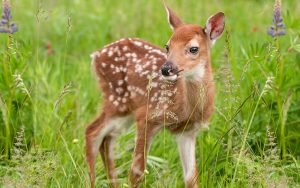 Close to 500,000 fawns are born each year across Virginia, and this is the time you may encounter them on or along roadways. Experts say the young deer don’t really get how to deal with moving vehicles — and neither do older ones.  Many newborn fawns become victims of predators like coyotes, bobcats or bears, but the many others that survive are now starting to move about with their mothers. When they come across roads and highways, it seems neither never really learn how to handle traffic encounters. WFIR’s Evan Jones has more:

The problem is always most pronounced during mating season in late fall, but Knox says the dangers of striking a deer are always present, mostly around dawn and dusk. Evan Jones, WFIR News.