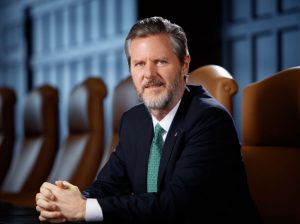 Liberty University President Jerry Falwell Junior raised the possibility today on national  television that North Korea and China might have conspired to release the coronavirus on the United States. Falwell appeared this morning on Fox and Friends, where he recounted a conversation with a restaurant owner:

“But I had a — the owner of a restaurant asked me last night, he said, do you remember the North Korean leader promised a Christmas present for America, back in December? Could it be they got together with China, and this is that present? I don’t know. But it really is something strange going on.”

Falwell says it remains his hope Liberty can continue in-person classes after next week’s spring break. The university has already cancelled large gatherings on campus.