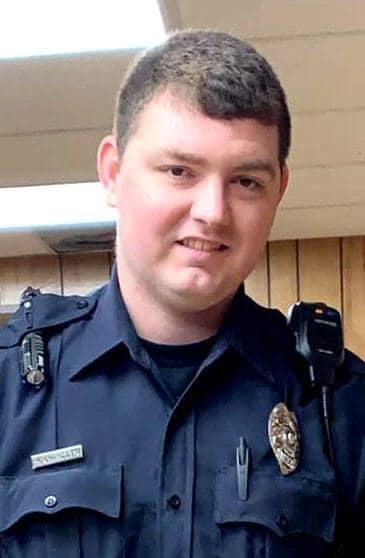 The body of the Big Stone Gap officer killed over the weekend in the line of duty will be escorted from Roanoke back home today. The Wise County Sheriff’s officers say there will be an escort tribute honoring Officer Michael Chandler. First Responders including Law Enforcement, Fire, and EMS will escort Chandler back home from the Roanoke Medical Examiner’s Office to be with his family, friends, and loved ones in Big Stone Gap, VA.

The AP previously reported on the shooting. Details are posted below.

BIG STONE GAP, Va. (AP) – Virginia state police say a 33-year-old man is in custody after a police officer from Big Stone Gap was fatally shot during a welfare check. State police said 29-year-old Offficer Michael Chandler died Saturday evening of injuries he received during the early morning shooting. Police said a suspect from Big Stone Gap was apprehended at a Tennessee motel by the Kingsport, Tennessee Police Department’s SWAT team, patrol division and criminal investigations division after an extensive search by local, state and federal law enforcement. He was being held on probation violations, and charges related to the officers’ shooting are pending.