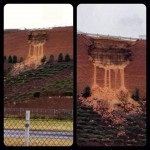 According to a new statement from developer Smith/packett, an investigation by engineers over the weekend on the South Peak wall collapse determined that a small section of the retaining wall gave way as the result of pressure from rain water in the storm drain, causing the facade of the wall to be pushed out. Engineers determined there is no structural issue. (pictures from WDBJ7) WFIR’s Gene Marrano reports: