Victim of May 13 structure fire in Southeast Roanoke is identified 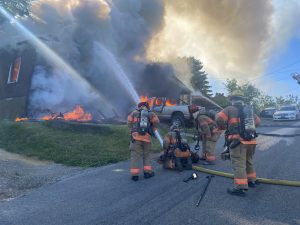 (Update 5/25)  The victim of the 10 ½ St SE fatal house fire has been identified as Keontae Lewis, 17, of Roanoke.  The Medical Examiner’s Office determined the cause of death to be smoke inhalation.

The Fire Marshal’s Office along with the Roanoke Police Department have conducted over 50 interviews, resulting in approximately 150 personnel hours in the investigation of this fire. The investigation into the cause is ongoing, however, at this point the department has no reason to believe the cause of the fire is suspicious.

(Previously) Roanoke Fire-EMS crews are responding to a structure fire this morning in the 100 block of 10 and a half Street Southeast. Authorities say a large column of smoke can be seen from miles away. Units on scene marked it a 2 alarm fire. We will provide updates when they become available.