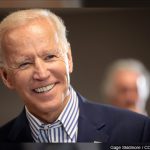 RICHMOND, Va. (AP) — Former Vice President Joe Biden has won Virginia’s Democratic presidential primary, reaffirming the state’s preference for moderate candidates over more progressive ones. Biden won the Virginia primary on Super Tuesday, a key date in the primary calendar when voters in 14 states made their picks. The full results from Super Tuesday were not immediately available. (With almost 96% reporting Biden was up more than 2 to 1 on votes over Sanders, with Warren and Bloomberg trailing far behind). Biden beat out Vermont Sen. Bernie Sanders, former New York City Mayor Michael Bloomberg and Massachusetts Sen. Elizabeth Warren. Virginia was a key test for Biden, who has started consolidating support among moderate Democrats after a convincing win Saturday in South Carolina. His victory shows an ability to win a state with diverse voting blocs, a mix of rural, urban and suburban areas, and many veteran voters.

The Biden victory is also a blow to Bloomberg, who launched his campaign in Virginia and visited the state several times since getting in to the race as a late entrant. He spent more than $2.5 million funding groups that helped the Democrats wrest control of the state legislature and spent lavishly on field staff and television advertising in Virginia. Once a key swing state, Democrats have won every statewide election in Virginia for the last decade,while also flipping partisan majorities in the state legislature and the congressional delegation.