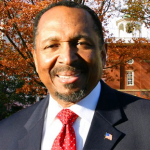 Virginia primary day is now less than four weeks away, and the three Republican candidates for U.S. Senate are doing their best to make their cases. One of them is E.W. Jackson, making his second run for statewide office, as WFIR’s Evan Jones reports.