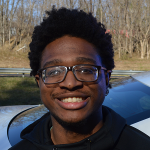 A southeast Virginia man is jailed after state police say he led them on a high-speed chase today on Interstate 81. Troopers say it started when a Pulaski County Sheriff’s deputy tried to stop a vehicle doing 78 in a 60-mile-per-hour work zone. 24-year-old Dejuane Wilson of Wakefield allegedly took off – and was captured about 35 miles later in the Salem area. State Police sent this photo of Wilson taken today after his arrest.