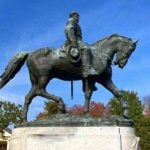 RICHMOND, Va. (AP) – Democrats won control of Virginia government for the first time in decades on Election Day, and that means Confederate statues could soon be coming down in a state that’s full of them. The long-running debate over whether such displays are appropriate in public spaces intensified after a white supremacist rally in Charlottesville grew violent two years ago, and many communities around the country quickly started taking monuments down. But in Virginia, local governments have been hamstrung by a 1904 state law that protects war veterans’  memorials. Previous attempts to amend it have been quickly dispatched in the Republican-controlled General Assembly, in votes largely along party lines. Democrats see an opening now. One lawmaker who represents Charlottesville says she intends to propose a bill that would give cities and counties control.