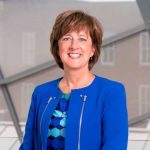 The Taubman Museum of Art Board of Trustees announced today the resignation of Executive Director Della Watkins, effective Sept. 8, 2017. Watkins joined the Taubman Museum of Art in 2013. Under her leadership, the Museum earned reaccreditation from the American Alliance of Museums; completed build-out of the last remaining gallery space that now hosts major national traveling exhibitions; reclaimed financial stability through steady fundraising and aggressive budgeting; and forged new collegial partnerships in Roanoke and beyond to champion the region’s arts and culture community (according to the statement). “While I’m looking forward to my next position as executive director for the Columbia Museum of Art in South Carolina, a piece of my heart will always be in Roanoke,” said Watkins.