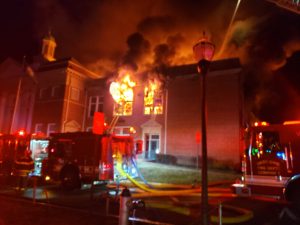 UPDATE: Investigators say there is no question that the fire at the former Bedford Middle School was the work of an arsonist – and they have discovered an accelerant in one of its rooms. Officials say it appears the fire was set in more than one part of the building. Police are using a specially-trained dog to assist in the arson investigation, and as more parts of the building are deemed safe, the dog will head there in efforts to find more evidence.

PREVIOUS: A massive cleanup awaits at the former Bedford Middle School, this after an overnight blaze caused extensive damage to the building. Officials say floors collapsed as the fire spread from one end of the structure to the other, and the building’s cupola came down as well. There is no word yet on what have started the fire in a building that was set for renovation into apartments. Town Manager Bart Warner says it is not clear yet whether that is still possible:

Fire officials say extensive overhaul will be required before fire investigators are able to enter and begin their probe into the cause. There are no injuries reported.

PREVIOUS :Crews continue to battle a massive fire at the former Bedford Middle School that broke out this morning around 3 on Longwood Avenue. The main building has sustained heavy damage, and the spire on top has collapsed. The fire has not reached the “Old Yellow” building or any of the other school buildings. There is no official word on what percentage of the fire is under control. In April, Bedford town council approved a deal to renovate the vacant school and turn it into apartments.

PREVIOUS:Emergency Crews are responding to a reportedly large fire this morning at the old Bedford Middle School on Longwood Avenue. The road is blocked off at Peaks Street and North Bridge Street. When asked, sheriff’s deputies told WSLS-10 they have been at the scene of the fire for so long they lost track. In April, Bedford town council approved a deal to renovate the vacant school into apartments.