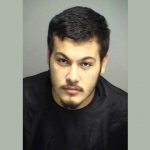 Convicted murderer Kevin Soto-Bonilla will not face the death penalty. Prosecutors and defense attorneys reached an agreement in the middle of today’s sentencing phase. Soto-Bonilla now admits guilt for his role in the stabbing death of Lynchburg teen Raymond Wood. In return, he was promptly sentenced to life in prison without parole. Soto-Bonilla received additional consecutive sentences for abduction and gang participation. He apologized to the Wood family during today’s hearing, saying  “I am very sorry to the Wood family. I imagine how a mother would feel. I regretfully feel it from my heart. And may God give you the strength to move forward.”

The turnaround came one day after a Bedford County Jury convicted Soto-Bonilla for capital murder. The jury was considering whether to recommend a death sentence or life in prison when he agreed to admit guilty in exchange for life in prison.