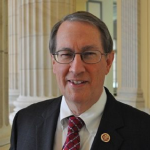 The son of a powerful Republican congressman has lambasted his father on Twitter for “ruining” the career of a recently fired FBI agent.
Bobby Goodlatte targeted his father, Virginia Rep. Bob Goodlatte, on Twitter after Monday’s news that the FBI fired Peter Strzok. The agent had sent anti-Trump text messages during the Russia investigation.
Strzok faced tough questions from the elder Goodlatte during a particularly brutal congressional hearing last month. The younger Goodlatte called the hearing a “low point” for Congress and said he was “deeply embarrassed by my father’s political grandstanding.”
Bobby Goodlatte also started soliciting campaign donations on Sunday for the Democrat who’s running in his father’s congressional district. The elder Goodlatte is retiring after 13 terms.
Democrats said Monday that they had received more than $25,000.