Child playing with lighter blamed for fire that displaces 10 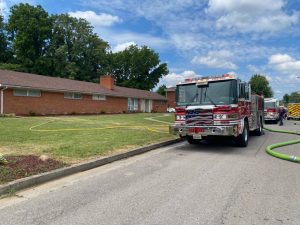 Roanoke City fire officials say a child playing with a lighter started a house fire today, one that displaced 10 people living on the 800 block of Grayson Avenue Northwest, not far from Washington Park. There are no injuries reported.

UPDATE FROM ROANOKE FIRE-EMS: The cause of the fire was ruled accidental & started due to a child playing with a lighter.

PREVIOUS: At 11:39am, Roanoke Fire-EMS was dispatched to the 800 block of Grayson Ave NW for a fire. When units arrived they found smoke coming from a residential structure. No injuries were reported. 10 residents will be displaced. The cause of the fire is under investigation.