Chicken Salad Chick to open next Tuesday with freebies 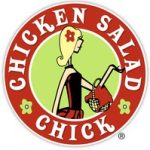 (PR Newswire) Chicken Salad Chick, the nation’s only fast casual chicken salad restaurant concept, announced today the opening of its newest location in Roanoke [County], the second location opening in the greater Roanoke community following the opening of the concept’s Christiansburg location earlier this April. As Chick fans get excited for the Roanoke location to open, they can also expect more to follow later this year in Hampton, Virginia. In celebration of the Roanoke Chicken Salad Chick opening on Tuesday, October 19, located at 4340 Electric Road, the restaurant will be offering free chicken salad for a year to the first 100 guests. (Guests should arrive between 7-10am to get checked in; the first 100 will be assigned a number and a time to return)

To kick off the grand opening, Chicken Salad Chick Roanoke will open their doors for friends and family to support a local charity that the local franchise owners are directly involved in, the Blue Ridge Autism Achievement Center, with the goal of helping the community even before opening day! This is something special that each new location does to put down its neighborhood roots, in line with Chicken Salad Chick’s core values of spreading joy, enriching lives, and serving others. During grand opening week, guests will experience the Southern hospitality that Chicken Salad Chick is known for with giveaways and specials that include: