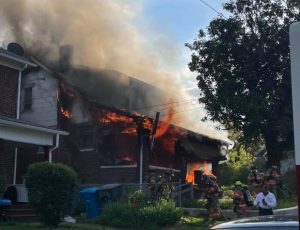 Roanoke city fire officials say a person who went back into a burning home yesterday and tried to put out the fire before calling 911 is hospitalized with life-threatening injuries.  In addition, officials say the delay in calling for firefighters resulted in more extensive damage to the home along the 500 block of Harrison Avenue. Officials say this serves as a cautionary lesson, as WFIR’s Evan Jones reports:

The cause is listed as improperly discarded smoking materials.

Fire officials urge you to get out, stay out, and immediately call 911 any time you encounter a fire in your home.

ROANOKE FIRE-EMS UPDATE: The fire was deemed accidental and started due to improperly discarded smoking materials.

PREVIOUS: At 6:13pm on 4/13/21, Roanoke Fire-EMS was dispatched to the 500 block of Harrison Ave NW for a fire. Upon arrival units found smoke and flames coming from a residential structure. One person sustained life-threatening injuries and was transported. The fire was marked under control at 6:55pm. Crews on scene working to battle the blaze encountered difficulty completely extinguishing the fire as the flames extended into the roofline, not accessible from the attic. Personnel were forced to cut a hole through the roof to extinguish the fire. The cause of the fire is under investigation.