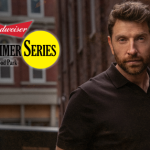 The Budweiser Summer Series returns to Downtown Roanoke’s Elmwood Park with our second show announcement of the season. We’re excited to welcome Brett Eldredge on August 19th. General Admission tickets to see Brett Eldredge are $39 and go on sale May 20th at 10:00am through ticketing agent, Brown Paper Tickets. Full details and ticketing link can be found at www.DowntownSummerSeries.com.

In a genre defined by the credo “three chords and the truth,” Brett Eldredge is about to set a new bar with his forthcoming album, Songs About You, due June 17. Candid in its approach and backed by an uncluttered, minimalistic soundscape, each of the 12 co-written songs finds the Warner Music Nashville artist getting raw and unfiltered in a way rarely attempted in country music – or anywhere else. The LP shines a light on themes like fear and desire, a public struggle with anxiety and his newfound appreciation for self-acceptance. And yet, despite the understated arrangements and live horns, the album’s defining characteristic is still Eldredge’s cavernous, signature vocal. The title track and single “Songs About You” was the most added song at radio upon release and along with previously released tracks “Holy Water” and “Want That Back,” give fans a taste of what’s to come from the new album.