Bowers on independent bid for 5th term as Mayor 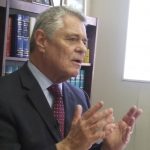 Many will recall that during David Bowers’ long tenure on Roanoke City Council and then as the 4-term Mayor, there was always a “D” after his name – but if Bowers is to secure a win in another bid for Mayor on Tuesday, it will be as an independent. He spoke live with us yesterday morning, as WFIR’s Gene Marrano reports: