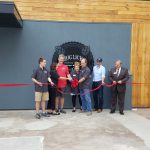 Forbes Magazine has released a story on the Top-50 fastest-growing craft beer brewers in the U.S. On that list is Roanoke’s Big Lick Brewing Company, which moved into a new, larger space on Salem Avenue in 2016. Bryan Summerson is the president. He says Big Lick patrons like the variety of craft beers they produce – and they love the outdoor patio, which he says has been “packed” recently. Two other northern Virginia craft brewers also made the Top-50 list: