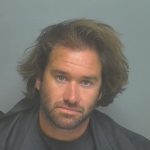 (from Bedford County Sheriff’s office) On October 7, Deputies with the Bedford County Sheriff’s Office responded to Vistarama Lane in Bedford County in reference to a possible stabbing. Upon arrival, they identified there were multiple victims. The suspect was identified as Andrew Karnes, age 32 of Bedford (pictured), who is related to the three victims.  Karnes was still on-scene and immediately taken into custody. All three victims were transported by EMS to Centra Bedford Memorial Hospital. One of the victims was later airlifted from Centra Bedford Memorial to Centra Lynchburg General Hospital in critical condition. Karnes has been charged with three counts of Malicious Wounding and is being held without bond in the Blue Ridge Regional Jail. We believe this was an isolated incident and there is no further threat to the public.