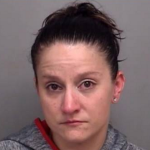 An Axton woman who came to the Henry County Jail Saturday for an inmate visit quickly became an inmate herself for an outstanding contempt warrant. The sheriff’s office says Jennifer Swinney allegedly concealed narcotics inside a body cavity, and once in jail, shared it with two other inmates. All three now face felony charges.

NEWS RELEASE: On June 8, 2019, at approximately 9:28 am Jennifer Nicole Swinney, 33, of 245 Urban Dr., Axton, VA came to the Henry County Jail to take part in the jail’s inmate visitation.  Deputies discovered that Swinney was wanted on an outstanding warrant for contempt of court.  The arresting deputy conducted a search of Swinney, and she was turned over to the jail staff who then processed her into the facility and conducted an intake search of her person.  Swinney was placed into the jail population at approximately 10:30 am.

Through the course of the investigation, it was discovered that Jennifer Nicole Swinney concealed narcotics inside of a body cavity prior to being taken into custody by deputies.  Due to the narcotics being concealed inside of a body cavity, they were unable to be detected by standard search procedures.  After Swinney was placed into the jail population, she and two other inmates snorted the opiates.

Jennifer Nicole Swinney, 33, of 245 Urban Dr., Axton, VA was charged with the following:

All Charges are felonies.  Swinney is currently held in the Henry County Jail without bond.

Mikayla Jae Thomas, 25, of 3573 Longview Dr., Collinsville, VA was charged with possession of a chemical compound within a correctional facility (felony).  Thomas is currently held in the Henry County Jail without bond.

Kimmarie Dawn Kennon, 24, of 1380 Trent Hill Dr., Bassett, VA was charged with possession of a chemical compound within a correctional facility (felony).  Kennon is currently held in the Henry County Jail without bond.