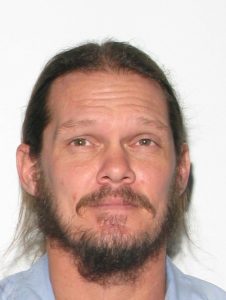 Authorities are searching for a man described as armed and dangerous who led them on a high-speed chase Thursday that began on Interstate 81 and ended with a crash in Craig County. Police say they believe 42-year-old Shawn Tolbert has been living in the woods ever since. Officials say it began when a trooper attempted to stop a vehicle that might be connected to a theft near Buchanan. It turns out there was no connection, but the driver took off anyway, leading to the chase and search for Tolbert.

With little information initially on the suspect vehicle, a trooper attempted to stop a vehicle closely matching the initial description. When the emergency lights were activated the vehicle refused to stop and sped away. The pursuit continued into Craig County where the vehicle crashed. The driver fled the scene on foot, and has remained at large since the crash. Further investigation has found that this was not the vehicle suspected in the theft.

Police have identified the driver as Shawn Michael Tolbert, 42, Burkville, Va. Tolbert is a white male, 5’10” with brown hair and hazel eyes. He is believed to have changed clothes and is living in the woods trying to elude police. Tolbert is believed to be armed, and may be dangerous if threatened.

Tolbert is wanted on multiple charges at this point, which include: Virginia State Police charges are 3 counts of Felony Elude Police and 3 counts of Reckless Driving. Additional charges have been placed by Craig County Sheriff’s Office: Criminal Trespass, Obstruction, False Identification and 2 counts of Felony Assault on a Police Officer.

There are multiple agencies participating in the search for Tolbert. If Tolbert is located we are asking the public to use extreme caution and to contact law enforcement.