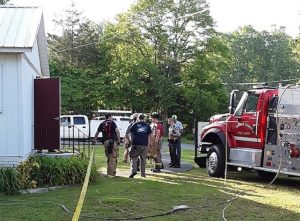 Arson is suspected in a morning fire that damaged a Franklin County church. The sheriff’s office says while there is fire and smoke damage at the New Hope United Methodist Church, the building is structurally sound. As to the cause, officials say it is “suspicious”, and they ask anyone who might have information to contact local law enforcement. On its Facebook page, the church posted: “The Church is NOT a building. The life of The Church is its People!! WE WILL CONTINUE !!!”

News release: On May 24, 2019 just after 6:00 AM, the Franklin County Sheriff’s Office Emergency Communications Center received a 9-1-1 call from a neighbor who saw smoke and flames as well as heard an alarm coming from New Hope United Methodist Church in Rocky Mount. Numerous units responded from the Franklin County Department of Public Safety, in addition to volunteer fire units from Callaway, Ferrum and Rocky Mount, and were able to quickly extinguish the fire. There is some fire and smoke damage to the church, however the building is still structurally sound. It is early in the investigation, but we can say that the cause of the fire is suspicious. The Franklin County Sheriff’s Office is working with the Fire Marshal for the Franklin County Department of Public Safety on the investigation. Additional information will be released as it becomes available. Anyone with information concerning the fire is urged to contact Sgt. J. P. Nolen at 540-483-6662, Deputy Chief Jay Mason at 540-483-3091 or call the Sheriff’s Office at 540-483-3000.