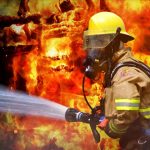 Roanoke police and fire officials are working to determine who torched three vehicles and an RV last night at 13th and Cleveland Avenue SW; that is near the Memorial Bridge over Wasena Park. The vehicles were parked behind a commercial building. There are no injuries reported.

UPDATED NEWS RELEASE: The cause of the fire has been deemed incendiary. Roanoke Fire-EMS and Roanoke Police Department are working to identify potential suspects. More information will be released as it becomes available.

PREVIOUS: On Tuesday, April 14th around 10:00pm, Roanoke Fire-EMS was dispatched to the 13th and Cleveland Ave SW for a working fire. When units arrived they found 3 cars and 1 RV on fire behind a commercial structure. No injuries were reported.