Arizona MVP pipeline protester arrested for locking self to helicopter 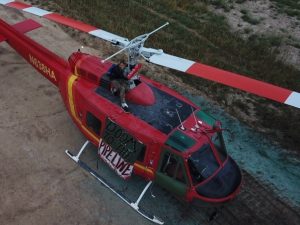 State Police say an Arizona man faces multiple charges – some of them felonies – for his protest of the Mountain Valley Pipeline in Montgomery County. Troopers say 24-year-old Galen Shirman-Grabowski of Tucson locked himself to a contracted pipeline helicopter yesterday. Charges include felony tampering or damaging an aircraft.

NEWS RELEASE: ROANOKE Co, Va. – The morning of October 7, 2019 the Virginia State Police was notified that an unknown individual was attached to a contracted pipeline helicopter, located on Cove Hollow Road, near Route 460 in Montgomery County. Pipeline security responded at 6:40 a.m. and located a male subject which was attached by a Sleeping Dragon to the rotor mast of the helicopter.  The subject was wearing a mask and refused to release himself from the helicopter. The Virginia State Police Tactical Field Force, Cut Team responded to the scene and removed the device.  Galen Sol Shirman-Grabowski, 24, of Tucson, Az, was removed and arrested.

Grabowski was charged with the following:

18.2-121 – Entering property of another for the purpose of damaging it; misdemeanor.

Grabowski is being held without bond.