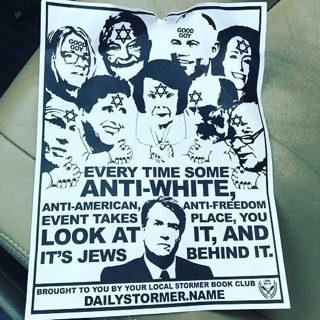 Roanoke College is condemning the anti-Semitic posters that were placed on Salem City utility poles across campus two nights ago. The posters blame “Jews” for the sexual assault allegations against Supreme Court Justice Brett Kavanaugh, and they depict Stars of David on the foreheads of Kavanaugh accuser Christine Blasey Ford, Senator Dianne Feinstein and others. College officials say the posters were removed as soon as they were discovered. Similar ones have gone up at other colleges in various parts of the country.

Roanoke College statement: Early Tuesday morning several anti-Semitic posters were found on City of Salem utility poles across the Roanoke College campus.  A national group is known to be distributing these posters in cities across the United States. The posters were removed as soon as they were discovered and Campus Safety has notified the proper authorities in the region. Roanoke College President Michael Maxey sent a message to the campus community Tuesday afternoon. In part, it read: “We condemn these hateful acts as antithetical to our Roanoke College values.  At Roanoke, we welcome all on equal terms.  In fact, treating one another as equals is one of our strengths as a College and community.”  Campus Safety officers will monitor the campus in case someone attempts such actions again.