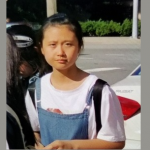 UPDATED FRIDAY PM:  A 12-year-old Chinese tourist has been found safe in New York a day after her tour group reported her missing from a Washington-area
airport. Metropolitan Washington Airports Authority Police said JinJing Ma was found Friday in the custody of her parents in Queens, New York. Authority police Chief David Huchler said at a news conference Friday that the girl excused herself to go to the bathroom Thursday after getting her passport at Ronald Reagan Washington National Airport. He said the girl met a woman, changed clothes and got into an SUV with New York tags. Huchler says a couple had earlier approached JinJing Ma while her tour group was at the World Trade Center. He says there appeared to be a link between that couple and the people she met at the airport.

PREVIOUS: A statewide Amber Alert has been issued for a 12-year-old girl from China abducted from Reagan National Airport while visiting the U.S. with a tour group. State police say JinJing Ma is believed to be in extreme danger.

AMBER ALERT: The Virginia State Police and the Virginia Missing Children Clearinghouse has issued an AMBER Alert on behalf of the Metro Washington Airport Authority, for a child abduction that occurred on August 2, 2018, Reagan Washington National Airport. The child is believed to be in extreme danger and was last seen leaving the airport on August 2, 2018. Abducted is JinJing Ma, Asian, Female, Black hair, Brown eyes, 12 years of age, 4 foot 11 inches tall, weighing 90 lbs. 12 year old Individual was in America from China on a tour group. She received her passport just prior to checking in and left her group. She met up with an unknown middle age Asian female, who assisted her in changing clothes. They then walked together to the arrivals area of the airport and disappeared out of camera view. The child is believed to have been abducted by an unknown Asian, Female, Black hair, approximately 40 years of age, wearing a black dress. A witness stated he may have seen same woman in NYC meet up with victim and hand her food. For further information contact the Metro Washington Airport Authority at 703-417-2400 or visit www.vaamberalert.com