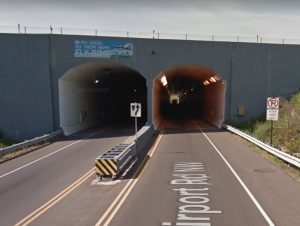 NEWS RELEASE: The lighting in the Airport Road/State Route 118 tunnel will be upgraded beginning on Monday, February 10, 2020. The first phase of the project will entail closing the Southbound Airport Road/State Route 118 tunnel beginning Monday, February 10 until approximately March 30 to allow crews to replace and upgrade the tunnel lighting. The southbound tunnel (heading toward the airport from Peters Creek Road) will be blocked off and the northbound tunnel (toward Peters Creek Road) will accommodate two‐way traffic during this phase of the project.

Motorists traveling Airport Road/ Route 118 during this period should expect delays and may want to identify alternate routes such as I‐581, Thirlane Road or Williamson Road (US‐11).