Man turns himself in after abandoned puppies located in Roanoke County 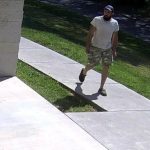 Update: Brandon Alley, 33, of Callaway, has turned himself into Roanoke County Police and now faces five summonses for abandoning an animal. He was cooperative with police. The department would like to thank the media and citizens for their assistance. Mom and puppies are doing well and settling into their foster homes

Previous: Tuesday around 1 p.m. Roanoke County Police received a call about an abandoned pit bull with four puppies found along Crowell Gap Rd, near the Franklin County line. An officer retrieved the dogs and brought them to the Regional Center for Animal Care & Protection (RCACP). It was discovered that earlier a male had been to the RCACP to surrender some dogs. He was given the contact information for the Franklin County animal shelter and asked to take them there as he was a resident of Franklin County.

Police believe this may be the same individual who left the dogs abandoned on the roadside and need the public’s help in identifying him. Attached are photos taken from the RCACP’s security cameras. He is a white male and was seen driving a white Chevrolet pickup with a black brush guard/grill. It is believed that he may be a welder as there is a large red welder in the back of the truck. The truck also matches the description given by the caller. Pictures of the pit bulls are also included. Everyone appears to be healthy at this time and they are all hungry and sweet. The puppies and mom will be in foster during their 10-day stray hold period and until they are old enough to have their vetting complete.